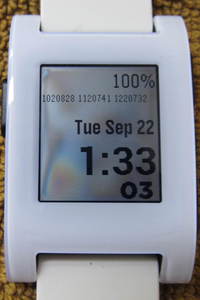 Time for a new watch. I chose the Pebble classic because I like the idea of a daylight-readable (e-paper) display and multi-day battery life between charges. The fact that several were available on ebay at good prices didn't hurt either.
Yes, I do love the display. It's a crisp and clear monochrome, easily readable in sunlight. In the photo, you may notice a bit of "rainbow" effect to the left of the time and date. That seems to be a polarization effect: it's noticeable when wearing polarized sunglasses or with indirect illumination from a clear sky. In direct sunlight or artificial light the rainbows go away.

The watch has an ARM chip in it, so of course I have to develop my own watch face. Pebble has an online development platform, but I decided to install the SDK on my Debian PC. I got the SDK from developer.getpebble.com/sdk/ and installed it per the instructions, which includes installing several libraries and python packages. A couple of notes:
And it works. I was able to compile a sample program using the "pebble build" command and install it using Bluetooth and an Android phone.
Posted by Joe Rothweiler at 2:33 PM